The bullish case for Bitcoin, price wise, is that a bitcoin could have a price valued in the millions in the long term. Of course, this is speculation and there are many factors at play.

Many of these markets are valued in the trillions or tens of trillions. Bitcoin in early 2020 was valued around $160 billion USD.

Bitcoin is still a baby in money terms - it has only been around since 2009 and was relatively unknown until 2013. Established monies have been around for hundreds or even thousands of years.

Because of this, it's still in price discovery mode and will be for the forseeable future. It doesn't have that trillion dollar liquidity yet.

Contrary to popular belief, the price volatility is not just necessary but required for the adoption phase of Bitcoin. This volatility is what brings in new users, investors, liquidity and builders into the space in cycles. It also clears out the scammers, opportunists and weak hands when the bear market hits them hard.

People should only fear volatility that trends downwards. Bitcoin's price volatility has been trending "upwards and to the right" since day 1 for over a decade now.

Bitcoin is the only thing on this planet that is both digital and truely scarce. There will never be more than 21,000,000 bitcoin in existence and that is baked into the code. No central entity can change this. Of the 21,000,000 bitcoin, over 18,369,000 have already been added to circulation. This means over 87.47% of all bitcoin that will ever exist are already in circulation (as of early summer 2020).

It's believed that a few million bitcoin have been permanently lost throughout time due to forgotten passwords, lost wallets, etc.

Below is the popular stock to flow model created by @100trillionUSD. Stock to flow measures the Bitcoin price based on the amount of circulating bitcoin and rate of new bitcoin being added to circulation.

Every country uses a monetary policy that involves something called quantitative easing. This is when a central entity controlled by a handful of people create large amounts of fiat currency out of thin air for "reasons" when they see fit.

Everyday people lose in this situation because:

In Bitcoin, it has a predictable issuance schedule of new bitcoin coming into circulation. The issuance cuts in half every 4 years. There has been 2 quantitative hardening events so far, one in 2012 and 2016. The 3rd event will be on May 12th, 2020 and will reduce the issuance from 12.5 bitcoin per 10 minutes to 6.25. 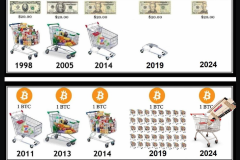 Many people don't see Bitcoin as an investment, they use it as a long-term savings technology. You are selling your fiat for Bitcoin. You are trading something that is infinite for something finite. You are storing your wealth in the worlds most secure, self-soverign bank that exists on this planet.

Tips
What is an altcoin?

An altcoin is either a literal copy & paste of Bitcoin's code base with altered parameters or a coin with a new experimental code base. In both cases, the common sales pitch is that they claim to be "better" than Bitcoin in some way.

"Better" is usually a claim to being "faster" than Bitcoin. Unfortunately, this very attribute of "instant" completely nullifies the only important usecase of a blockchain: digital immutability.

To achieve "fast" on a blockchain, you must sacrafice decentralization and if it isn't decentralized, it isn't immutable or secure and the blockchain becomes just another paypal like system but much less effecient. And if it's just another paypal like system, there is nothing special about it. Every direction you move towards in a coin's design has a trade-off and scraficies something. There is no such thing as magically adding an attribute that does not have a consequence in the general function of the coin.

It's Not Investing, It's Gambling

Let's try to keep it real, when you buy an altcoin you are gambling. You see tens or sometimes hundreds of random altcoins listed on an exchange. You don't know what any of them do, how any of them are different from one another, who was given a very large stake of coins for free, how many coins will ever exist, etc. If you are one of the few that does research an altcoin, all you will find are other people that pretend to know what they're talking about and you're probably not technical enough to truley understand anyways.

If you bought an altcoin it's because you saw a cheap price and wanted to test your luck.

Creating An Altcoin Is Non-Trivial Now

Everyone and their mother can create altcoins now and it's only getting easier.

Bitcoin is open source which means that anyone can copy and alter the code to create their own coin - enter the altcoins, a.k.a. shitcoins. Altcoins are mostly all scams with a few experiments. There's now thousands of altcoins and 99.5% of them have no utility except for an attempt to make someone a quick buck. Experimentation is great but pre-allocating a ton of the coins to you and your buddies and pumping your bags strictly for profit when your experiment has absolutely no use-case, security, decentralization, network effect, competent developers and is destined to fail is not only disgraceful but rampant in this space now. If it is an experiment, it should be treated like an experiment - the goal is to change the world. If it is something truly remarkable it will sell itself and catch on organically.

Altcoin Proponents - They All Spew The Same Junk

Many altcoin proponents spend their time preaching to others on how their altcoin is the next Bitcoin - "it is faster, cheaper and it can do everything imaginable!" Most people are not informed about the limitations or purpose of a blockchain. Fast payments to buy coffee aren't new or special. In fact, a blockchain isn't designed for that and because of how it works, it actually destroys the security model and purpose of a blockchain: digital immutability. It just becomes a useless, boring and ineffcient payment system. The main ingredient that makes a blockchain special is decentralization and using a blockchain for coffee payments removes this.

Tons of altcoin teams out there build a cookie-cutter website, build up a small cult with puppets, pay off some pundits, spend some money on an advertising team and voila you have the next Bitcoin! In addition, they all have a small central team of developers and a leader of the project.

The "next Bitcoin" motto has been around for over a decade now. Unfortunately, some new people fall for it all the time and get burned. The loud-mouth scammers or bag holders pretend to believe it and can sound convincing. But they are just pumping their own bags. Once you have been around these altcoin proponents for long enough, you begin to realize they are all the same and it will most likely continue for a while longer (maybe forever but to lesser effect). They are feeding off of the uneducated and the greedy. One day you should be able to spot these people and altcoins quite easily.

The last round of altcoins have to compete with the "new and improved" altcoins of tomorrow. We are already seeing this process take place as the 2017 bull market unwinds. Focusing on the top 10 altcoins, they are all flip-flopping and swapping their lead spots in the top 10. Most trend towards $0 over time and every altcoin loses their value in terms of bitcoin. Remember, when Bitcoin's price corrects after a bull market, you can bet the altcoins are going to crash much harder and are not guaranteed to come back. If Bitcoin goes to $0, everything is going to $0. Most altcoins from previous years you probably haven't heard of because they are completely irrelevant now.

As time went by and altcoin after altcoin piled in - we have learned that market caps are a very poor method of calculating a coin's dominance in the overall ecosystem because it's an endless sea of useless altcoins are constantly being added. Many of the altcoins have a token supply in the hundreds of millions or billions. We don't even know what the supply cap of some of the top altcoins are! With these large token supplies, the project just needs to sell 1 token for $1 and if the altcoin has 10 billion tokens, it now has a market cap of $10 billion dollars. In addition, most websites are mixing in Bitcoin with things that aren't even cryptocurrencies to determine their numbers, further invalidating the metric. These issues have rendered the coin dominance metric pretty much useless now.

Many of the altcoins had a pre-mine with a set allocation of coins for founders, developers, etc. Sometimes there are even covert pre-mines that break the supposed hard limit cap of the project (the latest example is bitcoin private). Some other projects have weird time locks on a large amount of the token supply or a pre-sale before the project is public.

Bitcoin Is The Next Bitcoin - The End

World class developers, protocol specialists, top cryptographers, cypherpunks and pioneers (some of who aided in the creation of the internet) have and continue to think of every aspect of Bitcoin over and over again - attack vectors, trade-offs, scaling, supplemental technologies, privacy, game theory, fungibility, etc.

A passenger of an airplane should not tell the pilot or engineer how to fly or build an airplane. Protocol engineering is no different. Everything that Bitcoin does, it does for a very important and technical reason. Bitcoin takes a slow and "do not break things" attitude for protocol changes - the utmost importance for a protocol dealing with over 200 billion dollars worth of value. Having gone through all that - if Bitcoin needs to implement a secure, innovative, thoroughly tested code from an altcoin it can be integrated. Bitcoin is code. It is adaptable. Bitcoin is the next Bitcoin. The media has claimed Bitcoin is dead over 300 times now - yet it's still here and thriving. Attacks on Bitcoin only make it more resilient. There's a reason why Bitcoin is called anti-fragile. So be warned, dabble in altcoins at your own risk. Some people need to touch the stove and get burned to learn.